Acoustics is the science of sound. There are a number of different working areas, which are sometimes difficult to define:

Acoustic design is the attempt to give a product a pleasant or unique sound. For example, the closing of car doors, sounds from electrical appliances or the acoustic noise made by food when eating have long been subject to design by acoustic experts.

In architecture, it corresponds to the attempt to give a high-quality or individual acoustic character to the room. Correct positioning of the room and use of absorbers tuned to a specific frequency range are required for this. Good acoustic design has a subliminal – yet strong – effect on the perception of a room’s quality.

Alpha-s, measured in one-thirds octave values, and Alpha-p, which has been converted to octaves, are used for the calculation. As an aid, the so-called reference curve is used. This is moved vertically in steps of 0.05 until the sum of negative deviations from the octave value does not exceed 0.10. Alpha-w is then measured at 500 hertz. Significantly increased absorption performance in certain frequencies of at least 0.25 are expressed by bracketed letters L = low (250 Hz) M = medium (500 and 1000 Hz) or H = high (2000 and 4000 Hz). Thanks to these additional letters the Alpha-w measure is somewhat more precise than the absorber classes. Nonetheless, for high-quality acoustics the frequency profile of the absorption capacity must be considered and adapted to the requirements of the room.

The rate at which air pressure changes (for airborne sound) is called the frequency. It is measured in Hz (Hertz). 1 Hz is therefore one oscillation per second. When reproducing sound, the frequency determines the pitch. In acoustics, a doubling of the frequency corresponds to the interval of an octave. Thirds (1/3 octaves) are used as smaller intervals. Frequencies between 16 Hz and 20 kHz are audible to the human ear, that being around 10 octaves. There is large variation between individuals and the upper limit falls considerably with age. Sounds with a frequency below 16 Hz are referred to as infrasound (subsonic), while above 20,000 Hz is ultrasonic, and above 1,000,000,000 Hz (1 GHz) is hypersonic. 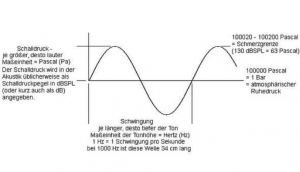 A sound-absorbing property is often attributed to panels or wooden elements. Sound absorption can only be achieved by perforation and wall spacing, however.

The main vehicle for the transmission of information in language is the consonants. These lie in the frequency range above 1000 Hz (see diagram on the right – source diagram: HV Fuchs (2007) Schallabsorber und Schalldämpfer (Sound Absorbers and Mufflers) – published by Springer Verlag)

In terms of the demands placed on sound absorbing measures, consideration of sound radiation is of great importance. 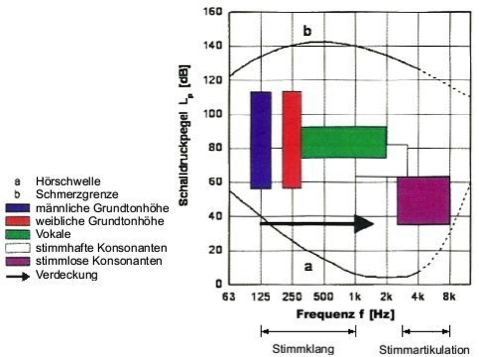 Although the volume level serves well for labelling the volume of different sounds, perceptual differences can only be demonstrated in an unsatisfactory manner. For this reason, loudness (measured by the sone) was introduced. In acoustics, when doubling the loudness value, a sound is respectively perceived as twice as loud. A volume level of 40 phon loudness is given a value of 1 sone.

The sensitivity of the ear is frequency dependent. The threshold of hearing at 1000 Hz is about 0 dB, whereas at 20 hertz, it’s about 70 dB (see diagram above). In order to cope with these perceptual differences, there is the volume level (measured in phon). At a frequency of 1000 hertz, the sound pressure level (dB) and volume level (phon) are identical. Instead of the volume, the loudness (sone) can also be specified. 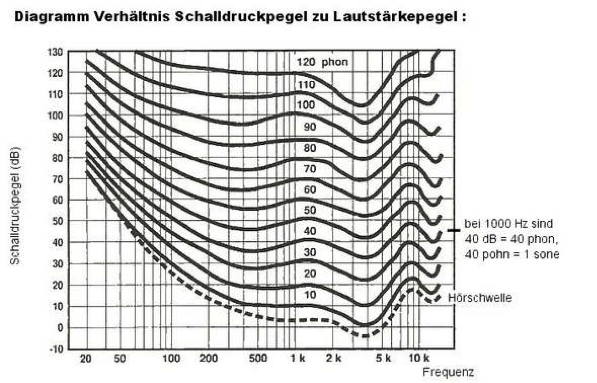 The reverberation time – that is the amount of time a noise reverberates – (sound pressure decrease by 60dB – i.e. to a millionth of its original value). It is the most important indicator of good acoustics in general and room acoustics, and is expressed in seconds.

The reverberation time depends on the volume of the room and the absorption coefficient of its surfaces.

If reverberation time is too long – impact on acoustics:
When speaking, an excessively long reverberation time causes subsequent syllables to be overlapped by those preceding, due to the sound fading slowly. This reduces intelligibility. If sound fades too slowly in music, especially at low frequencies, this causes sounds to merge, producing a “muddy” musical impression.

The optimum calculated reverberation time is then applied to the entire frequency curve. 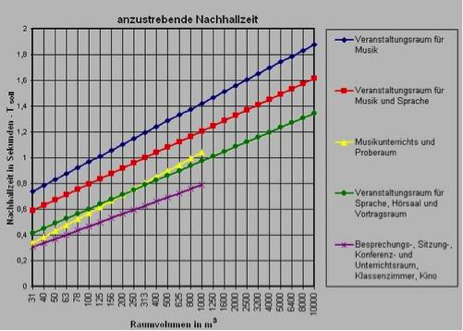 Room modes are particularly relevant for small rooms used for music (high proportion of low frequencies). The larger the volume of the room, the more the room modes shift towards the lower frequencies, becoming less important.

Particularly affected are rooms such as:

Room modes are formed between two reflecting walls, in the frequency in which wavelength is half (or a multiple thereof) of the distance between the walls.

Within these eigenmodes, a highly uneven local sound field is present. This is visualised very effectively in the room mode calculator. Using bass absorbers, these standing waves can be mitigated. These absorbers have to be mounted on the surfaces between which the natural frequencies occur.

If possible however, the proportions of the room should be considered during the planning phase. Natural frequencies always occur particularly strongly when one of the room’s dimensions is an integral multiple of another. So for example, in a room that’s twice as wide as it is high. The deviations from integral multiples should be at least 10%.

The larger the volume of the room, the more the room modes shift towards the lower frequencies, becoming less important.

Sound waves are pressure variations in an elastic medium. The medium may be gaseous (airborne sound), liquid (waterborne sound) or fixed (structure-borne sound). The movement is transmitted to the adjacent particles by bumping. This results in compression and thinning of the material and the propagation of the sound. In a vacuum there is neither sound propagation nor acoustics because there is no matter.

Panel absorbers are thick panels which are installed at certain distances to a wall or ceiling. According to area density, stiffness and clearance to wall/ceiling, these plates begin to vibrate at certain resonant frequencies. Through this process energy in the sound field dissipates, mostly narrow-band and deep resonant frequencies (low frequency absorbers).

After extensive experimentation and evaluation of the research results obtained in our acoustics laboratories, we ceased our activities in this area of product development. Despite what some theories may postulate, every change in the stress ratios of the panels (mounting distances, air humidity, mineral wool placement loose/tight etc.) led to varying results. Absorption performance was either entirely negated or suddenly present in a completely different frequency range.

Thus as a low frequency absorber we recommend our micro-perforated Micro L1, which offers consistent and reliable results thanks to a completely different kind of absorption principle.

Panels, boards, tiles and other elements made of wood are sometimes ascribed sound-absorbing properties per se. Yet sound absorption is only truly achieved through perforation and distance to a surface, e.g. a wall. And in the case of panel absorbers, panels made of wood exhibit lower effectiveness and performance stability than those made of metal (increased effects on stress through room humidity and temperature, inadequate relationship between mass and stiffness, etc.).

Sound waves are an elastic medium producing an audible sensation. The medium can be gaseous (airborne sound), fluid (waterborne sound) or solid (structure-borne, also called solid-borne sound). Sound is an oscillation in pressure, stress particle displacement. It results in both compression and thinning of matter and propagation of sound. In a vacuum, sound cannot travel, and there can be no acoustics, because there is no matter.

The equivalent sound absorption area can be applied not only to the boundary surfaces of a room, but also to the objects and persons therein, and is therefore of fundamental importance to the calculation of the room’s acoustic characteristics. By doubling the equivalent absorption area the sound pressure level decreases by 3 dB. 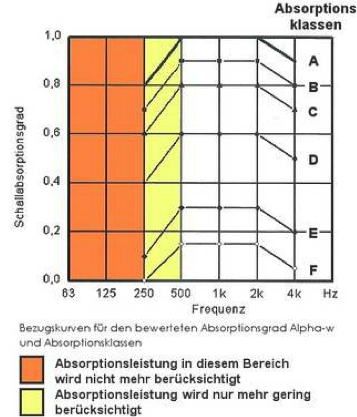 Sound absorption classes are classified with the letters A-E.

These are derived from the weighted sound absorption coefficient “Alpha-w”.

The frequency curve of the sound absorption cannot be expressed using these classifications. In fact, medium or low absorber classes with increased sound absorption performance in the middle or lower frequency range are generally required for optimum reverberation times. In our view, this classification system is usually insufficient as a result. Although it makes things more complex, the entire frequency curve of an absorber must nevertheless always be considered. 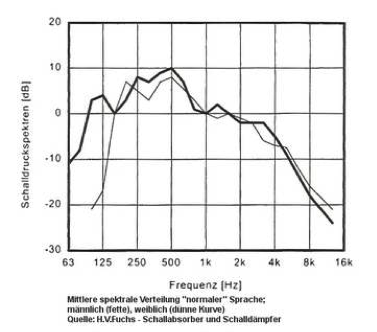 Sound pressure is the change in pressure which is caused by oscillating air molecules. This is perceived as volume. It is remarkable to consider how very small these changes in pressure in fact are. The atmospheric static pressure surrounding us is about 1 bar, which is around 100 000 pascals – the pain threshold is found at a change in pressure of about 63 pascals (= 130db SPL) and the hearing threshold at 0.00002 pascals. In other words, an air pressure fluctuation of 0.063% from the static pressure = pain threshold = 130 decibels (dB), while an air pressure fluctuation of 0.00000002% of the static pressure = hearing threshold = 0 decibels (dB). The perception and pain thresholds are frequency dependent (low-frequency acoustic processes require greater sound pressure levels than high frequencies in order to be perceived, for example) and vary greatly from person to person. A sound field can also be described by the sound power and the sound power level (dB SPL). In acoustics, sound pressure level is the most common metric. 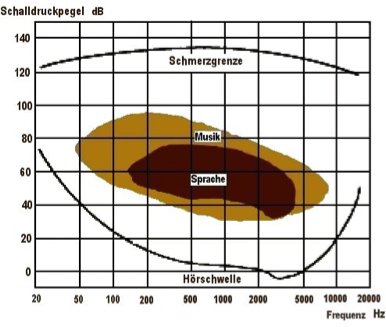 Acoustics – Calculation of the reverberation of a room